In the busy queue amongst the Edinburgh Fringe goers the excitement for Theatre Re’s BIRTH was high, and rightly so! As this was one of the most beautiful pieces of theatre I have ever seen.

Theatre Re, known for their international success Nature of Forgetting (which I was lucky enough to see last year), has not let the bar drop with this new production BIRTH. Guillaume Pigé has directed another wonderfully human and tremendously moving performance, this time exploring the sensitive subject of child loss and foundations of family.

The black box theatre was minimalist; with a dimly lit dining table centre stage. As soon as the performance started the mesmerising music, composed and performed live by Alex Judd, gently guided us into the world of physical storytelling and I was completely immersed within seconds.

Ultimately, it was the continual flow of the performance which I found most impressive – the energy never dropped. Not even during transitions, which can sometimes be a productions biggest flaw, however Theatre Re found an aesthetically creative and efficient way to slip into the next scene; by flowing a giant sheet over the whole stage as characters appeared and disappeared almost like a beautiful magic trick. 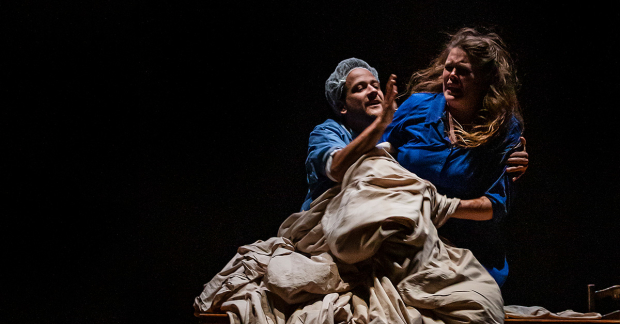 The story follows three generations of women in one family; non-chronologically showing each of their lives and how their experiences intertwine with each other. One of the highlights of the piece being when Emily, played by the extremely talented Eygló Belafonte, gives birth. Instead of the generic panting and pushing, Theatre Re have found an amusing and artistic way of portraying this with a detailed dance between the husband and wife, and ending with a marathon sprint with cheers of encouragement from the whole family, this may sound simple but it was so unbelievably effective.

Throughout the performance I heavily reflected on my childhood, my family, and my sisters, and was certainly not the only one with tears in my eyes. It is safe to say that Pigé has created such a memorable and dynamic piece of work, which should be performed all over the world. The company have an astounding ability to devise such original and heart felt moments, I congratulate them on their much deserved success.

Naked People Waking Up was a perfectly minimalist production, focusing on the text and the capable cast to take us through the very different lives of each character. Performed in the slick black box theatre at Etcetera Theatre, the performers’ ability to multi-role and find the truth in the text made the different scenes believable without needing extravagant set.

The relatable protagonists consisted of a middle aged impolite man with a comical demeanour, a woman focusing all her attention on the lack of attention she receives from her father, a young lad working in Wetherspoons despite his degree and intelligence, and an even younger school boy working on his confidence… and they wake up in an empty room together in there matching underwear  (I wasn’t 100% sure why they would all have the same underwear, but soon realised it was practical for the frequent multi-rolling and in keeping with the minimal style). 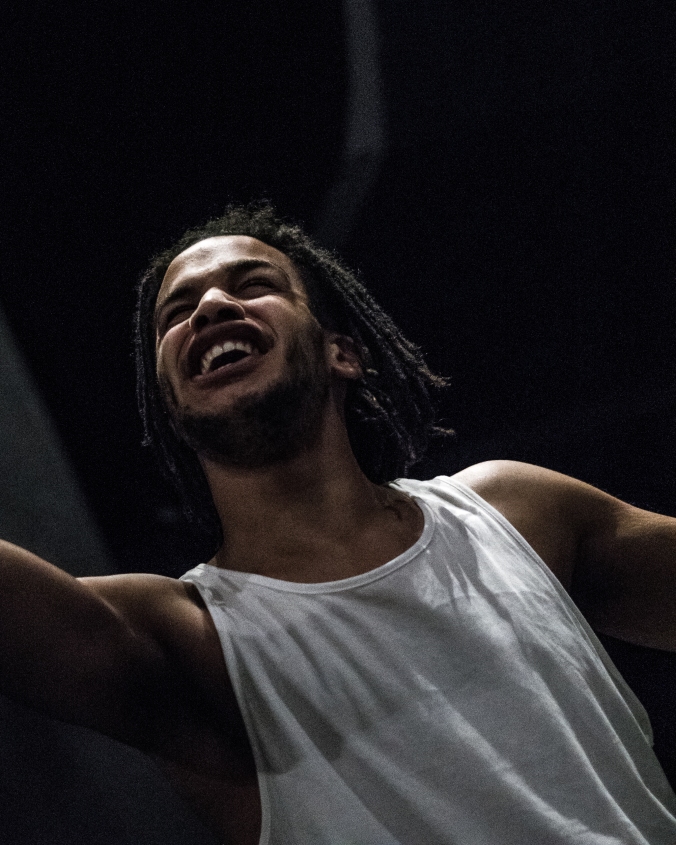 The story was very clear from the start, although I felt the beginning section – where the characters woke up and met for the first time – was slightly rushed and could possibly be developed further. However the show progressed at a great pace, with the characters regularly being tossed into various flashbacks and interesting memories which allowed us to build our understanding of each storyline gradually. Too often we are spoon fed theatre, but Concept Theatre has created a strikingly fresh piece of work here.

There were many highlights to this show; the audience responded extremely well to the comical moments of the piece – jokes involving cheap Wetherspoons food etc – which gave the show a lighthearted atmosphere, only to bring us straight back in with emotional monologues of realisation. In particular, I was blown away by Cathy Parkin’s ability to bring text to life and draw us in with her emotion. All the cast were emotionally committed through the text, however I would love to see the physicality brought to life even more.

A troubled young woman who comes to a deep realisation on what matters most. Played by Cathy Parkin

An honest performance highlighting the pressures we put on ourselves when we lose sight of what matters – in life, in love. Naked People Waking Up encourages the audience to reflect on ourselves and the choices we make. Overall, this was a well-rounded performance with a talented cast and brilliant director, a must see!