I didn’t really know what to expect from this show, as radio has never really been my thing (I don’t even listen to podcasts), I’d never heard of “Foley artistry” in my life, and I’m a huge wuss who usually avoids anything mildly spooky. However, not only did I thoroughly enjoy last Saturday’s matinee performance of The Play at Eight, I even returned for the evening slot!

A radio play within a play, the setting for this show is a radio studio of the 30s, and we the audience its studio audience. At first, the radio sound engineer-slash-announcer (co-writer Jack Williams) was the only one on stage, introducing us to the British Empire Radio Corp, the era, and the aesthetic of pomaded hair and rolled Rs. We listened to pre-recorded advertisements for Alka-seltzer and Zonite until the other cast members emerged. The Director was played by real-life director Matthew Jameson, and the two actors – Nancy and Dick Everett – by Jordan Baker and Becky Coops respectively. 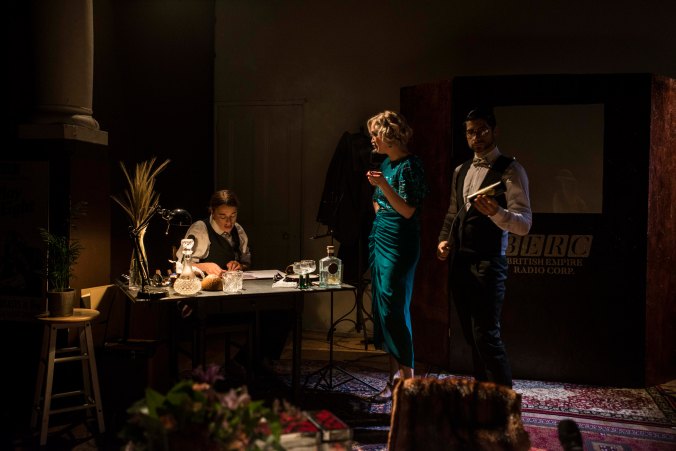 Becky Coops, Jordan Baker, and Jack Williams in The Play At Eight: The Monkey’s Paw. Photography by Natalia Queirolo.

The Everetts are an unhappily married showbiz couple, a bundle of easy tropes tied together with makeup and snark – he’s an alcoholic and a scoundrel, she’s a gold-digger and a nag. This tired old dynamic was made tolerable to a 2019 audience by the casting of women in both roles; Coops was excellent as the swaggering, bucolic, greasy Dick, even sleazing on an audience member throughout the course of events (yes, I had the honour). Her facial expressions and body language were spot-on, and she modulated her voice so well that I often forgot she wasn’t a middle-aged man with the plummy vowels of the early 20th century. Jordan Baker (with the perfect name for the era) as Nancy also had the accent of the era down pat, along with self-applied makeup and hair styling. Her dramatic flourishes and acidic asides to the audience were delivered with impeccable comic timing, and she did well in bringing layers of performance to an otherwise two-dimensional character.

The three male actors (Jameson, Williams, and sound technician Matthew Walker who has a highly comic cameo as Professor Swan) were clearly having a great time inhabiting their characters, playing off each other with cheeky charisma. The set was furnished by Williams with an assortment of olde-worlde knickknacks, and the authenticity and charm of this play’s dressing – not just the props, but also the lovingly crafted recording booth, and the vintage-style artworks – was a major strength of the production (set and graphic designer Sam Moulsdale is to be congratulated).

After some scene-setting, replete with bubbling tension between the actors and spite-laced practical jokes, the radio play began. The lighting dimmed, with only the two tables (one for the actors, one for the Foley engineer) as islands of illumination. We were urged to close our eyes for full immersion in the radio experience, and the gothic horror tale of The Monkey’s Paw began. 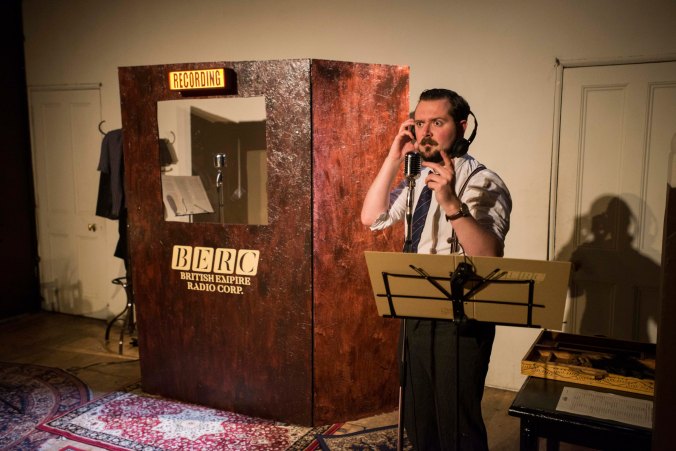 Matthew Jameson in The Play At Eight: The Monkey’s Paw. Photography by Natalia Queirolo.

This was originally a short story written in 1902 by W. W. Jacobs, and has been adapted for various different media formats over the century since. This version has been edited by Williams and Butler for a smaller cast and to allow for some world-building embellishments. With its imperial British setting, there are a number of rather unfortunate references to “quaint superstitions” and “primitive natives” etc, but I excused these as being relics of Jacobs’ time. However, in researching for this review, I stumbled across the original text from 1903, and was surprised to see that almost none of these now-racist tropes were actually present in the original. Were they added in a later 20th-century adaptation for extra exoticism, or written in by Williams and Butler especially for this Play at Eight? Either way, I would highly recommend reconsidering this for future iterations of the play, as it doesn’t add anything particularly valuable to the performance and is very out of place in a piece of modern writing.

This is part of one of the weaknesses of this show – it is highly entertaining, equal measures funny and spooky, but doesn’t have much weight to it or anything particularly interesting to say. It’s something of a missed opportunity to skirt discussions such as colonialism or repatriation of museum artifacts, particularly with a character from the British Museum! Of course I understand that not every piece of theatre needs to be explicitly political, but questions of race, culture, gender expectations, etc are inherently political and it is simply not enough any longer to portray antiquated attitudes uncritically.

That said, The Play at Eight: The Monkey’s Paw really is jolly good fun, as evidenced by my decision to see it twice! The loving attention to detail, spirited performances by talented actors, and self-aware humour both scripted and improvised, ensure a fun hour. The element of Foley artistry (creation of audio special effects live on stage) was an added bonus, and excellently pitched for entry-level Foley audiences such as myself. I would love to see this piece developed further and taken on tour – if it happens, I’ll be right there in line for a third ticket!

One thought on “REVIEW! The Play at Eight: The Monkey’s Paw by Storyfleas @ The Space Theatre”