Open entering the re-purposed church that is The Space Theatre, it really did feel like walking into a meeting of AA, or some other self-help workshop run by professional “love coaches”. The raised stage was being used only as a platform for tea and coffee dispensation, and where pews once stood, plastic chairs were arranged in a ring. Arriving alone (which was a shame, because I feel this experience would absolutely have been enhanced by the presence of a partner), I hesitated in taking a seat, which was how I had my first interaction with “Sandra” and “Mike”, who would be running the workshop under the guise of the (not-so) perfect couple. They greeted me warmly, but with a certain artificial friendliness suggesting that these workshops were more of a money spinner than truly community spirited. I found myself in a seat next to a nice stranger called Helen, and soon enough, the show began.

From the start, Mike and Sandra (Edward Kaye and Becky Gibbs) played a slick role, bouncing plasticky enthusiasm and smiles back and forth as they bantered through an introduction. Their dynamic was an old one – she’s business-like, cool, and bossy, he’s goofy, overly affectionate, and oblivious – but tropes become tropes for a reason, and this fraught relationship provided an opportunity to explore the perks and pitfalls of a long-term relationship. 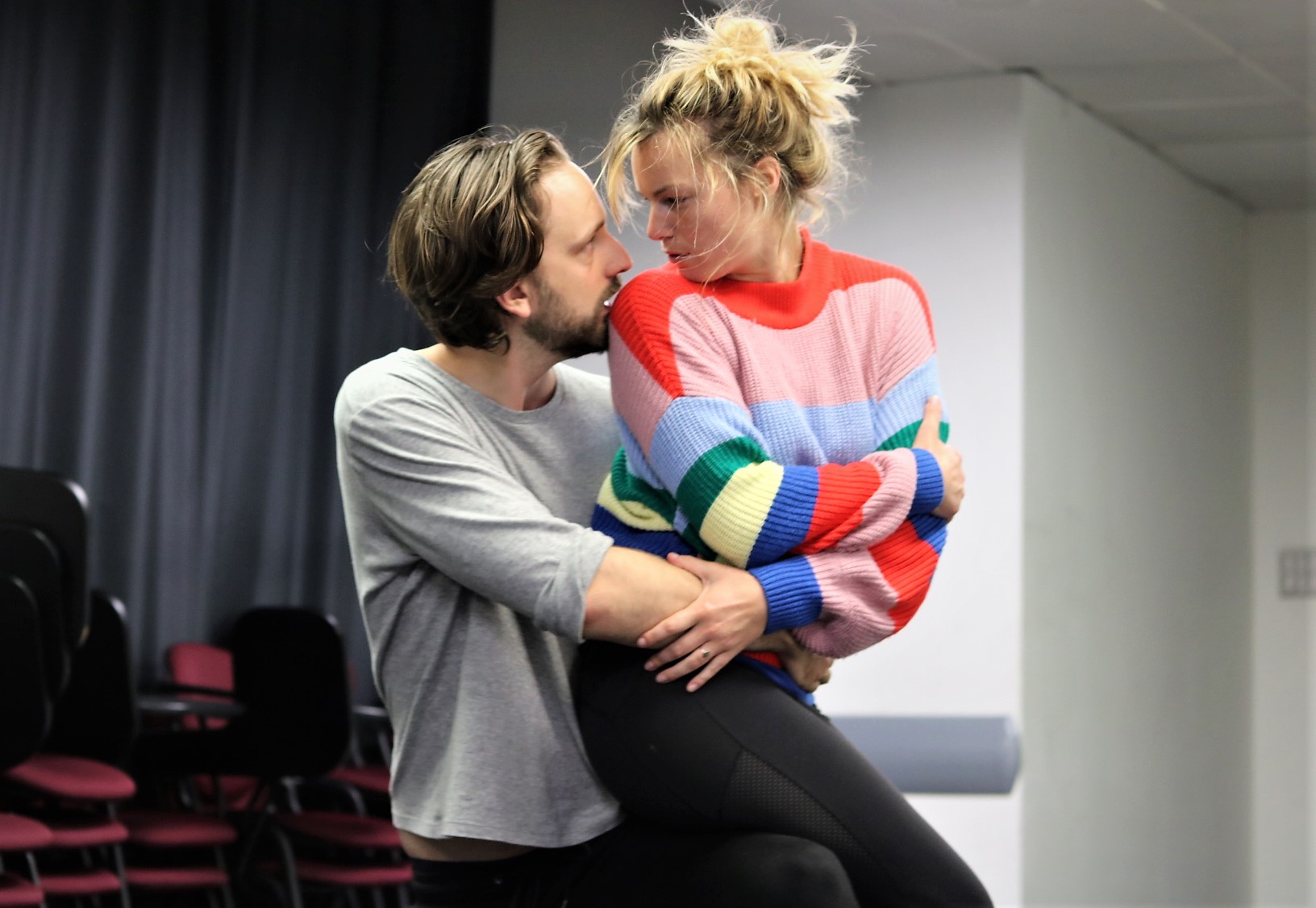 Though they’d obviously made an effort to be gender- and sexually-neutral in their dating advice,  the whole thing did have a bit of a “women are from Venus, men are from Mars” sort of vibe to it. The male actors / audience plants were almost all either creepy in a funny way, socially inept, comically geeky, or a combination of these, whereas the one woman “audience” actor was more of a quirky MPDG type. These men all had issues treating women like people, and the woman… existed basically to challenge unhealthy attitudes from the men? I don’t remember her having a story of her own, unlike the others.

The one audience actor whose role defied these trends was playing a man who had lost his partner in a tragic accident, moments after having a fight with him. This sudden death was hinted at through a frozen-time flashback at the beginning of the show, but this apparent trauma was left a mystery until near the the end. The effect was a neat bit of ground-laying with effective emotional payoff later, and though again this character’s story and it message were not exactly original, they did provide a certain amount of earnestness sincerity which contrasted nicely with the silliness and melodrama of the rest of the show.

The show blurb promises a wide range of love-related discussion topics: “from sexuality to sex, tinder thrills to online spills, everything is welcome”. Did it deliver? Well, there was a lot of ground covered: there was a very humourous section on online dating, some cringey stories about awkward first dates, a debate on the morality of pornography, an exercise about working through conflict, exploration of the familiarity/banality of sharing a life with someone, and much more. None were explored in much depth, but there were certainly some interesting moments of introspection and examination of societal norms. I think that in 2019, perhaps more types of “non-traditional” relationships could be explored – as it is, the show is mainly quite blandly heterosexual, except for mentions of homo/bisexuality thrown in for shock twist value rather than being examined in any meaningful way. 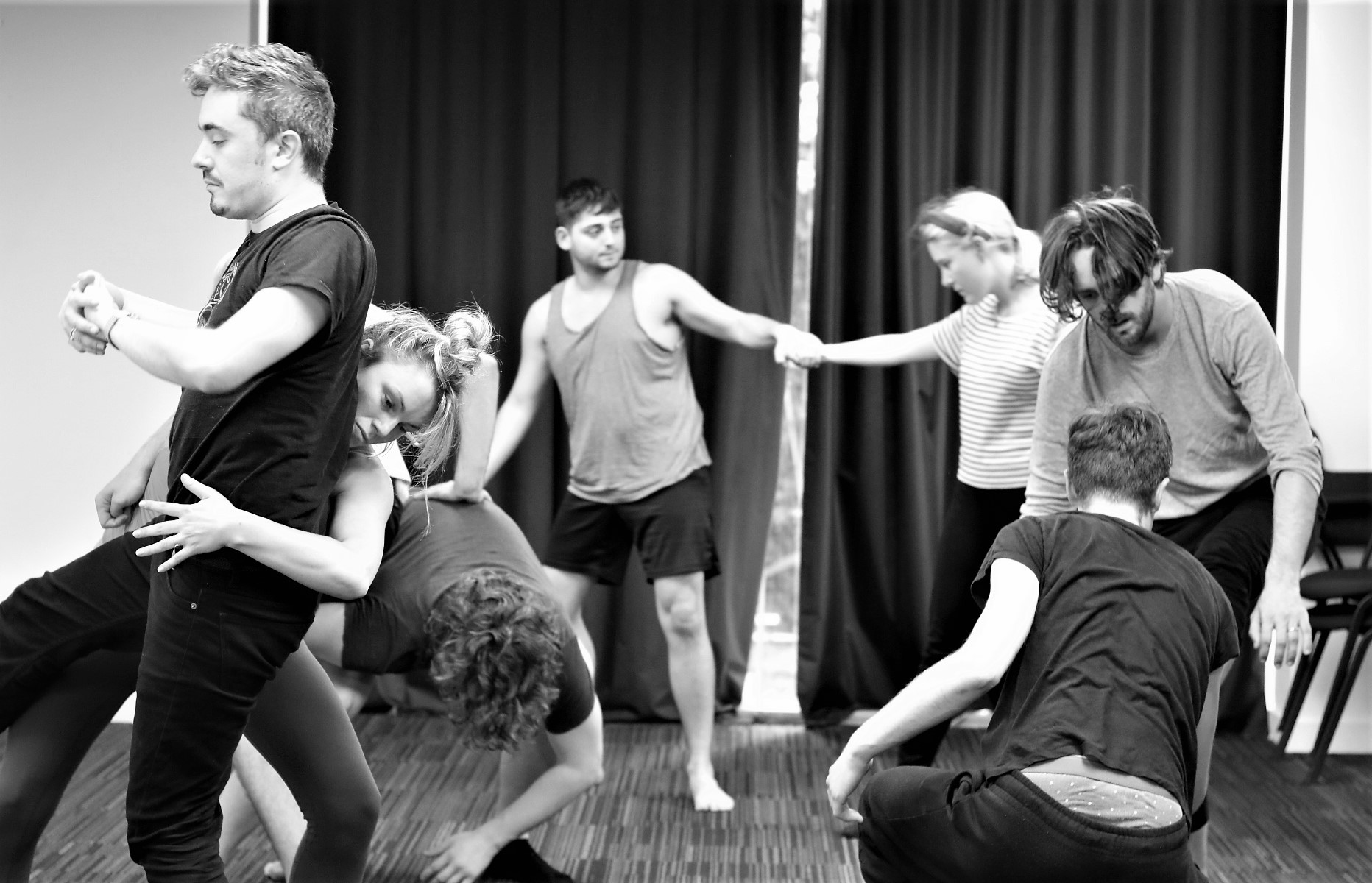 Likewise, the audience interaction was played very safe, and honestly other than myself and one other audience member, I don’t think anyone really actively participated except the audience plants. It’s difficult in immersive theatre to challenge audience members and draw them into the show as active members without making them uncomfortable, but Lover Anonymous definitely stopped shy of either of those outcomes. This made it a little tame for me, but certainly much more welcoming for theatregoers who are not as used to audience interaction. For future iterations, I would advise some segments where audience members are split into smaller groups (perhaps with one actor planted in each, to guide things along) for activities that allow them to interact with the material and one another without being put on the spot. This would be easy to do without losing the workshop/seminar feeling of the piece, and make it more hands-on. The rhino/porcupine exercise was a good start towards this sort of dynamic – keep heading along that path!

All in all, Lovers Anonymous has the potential to be further developed into a really interesting and fun show: it already has a beautifully playful and welcoming atmosphere to it, some excellent comedic moments, good snippets of physical theatre, and a number of tightly written and executed scenes. With increased audience involvement and a more daring foray into meatier love-related topics, this could become the kind of show that would make anybody swipe right.

Attaboys. That was the affectionate name given to pilots of the ATA, the Air Transport Auxiliary, a civilian organisation set up during World War II to ferry aircraft between factories and military sites, thereby freeing up RAF pilots for front line service. Except that many of the “boys” were women, who joined because, unlike with the RAF, they could be accepted into the ATA regardless of gender, age or disabilities.

Spitfire Sisters tells the as-yet little-known stories of several of these women, following their daily lives at the airbase, awaiting their assignments under the constant threat of air raids, doing their best to live in a country torn by war. It follows a year in their lives during the war as they navigate their way through a society where they were not only largely invisible, but also actively put in harm’s way: women were only allowed to fly if they did so without instruments. Considered too unskilled to learn how to use the same tools as men, they were given a compass and a map, and nothing else.

The background of the fight for gender equality, with women dealing with the same problems and dangers as their male counterparts while having to prove their worth every step of the way, is unfortunately a familiar one to this day. The struggle is depressingly real, and so are the women’s attitudes towards it, from unwavering dedication to the cause, to complete indifference, to casual interest, to a resigned acceptance of their status.

The script shines in how it portrays the diversity of voices and backgrounds of these women, who joined out of a need to find freedom from social constraints, to prove their self-worth to themselves and others, to follow a bright-eyed fascination with machines, to flee a home that had no place for them, to create a better life for themselves, to fight for their country and find closure to the traumas of the war.

Their love of flying is the common ground, as all-encompassing as the rumble of the Merlin engines. The top notch quality of the cast, who are absolutely believable in their individual portrayals and in their relationships to one another, brings this to the foreground, and ties the otherwise loose story together. The scenes when all the women are together, either celebrating rare moments of respite or mourning yet another unthinkable loss, felt genuinely joyous and/or heart-wrenching. Every emotion here is layered, from blind devotion and self-sacrifice, to self preservation and independence, carefree affection, quarrels and rivalries between friends, lovers, colleagues, superiors. Mary Roubos stands out as the vivacious Georgia, while Chloe Wade’s Jessie combines fierce determination with genuine compassion.

Unfortunately, the powerful moments make the less effective parts of the script conspicuous in comparison. The scenes featuring the only male character felt particularly weak, his coarse manner and outbursts a jarring contrast to the women’s nuanced portrayals. Perhaps this was on purpose, but it felt unnecessary. Finally, the aesthetic choice of having the cast smoke on stage may have helped to create an accurate atmosphere, but it made my head and lungs ache as much as the poignant scenes made my heart ache. I didn’t notice any warning in the programme about this involuntary audience immersion, and it is something that should be flagged for future performances, for asthmatics and non-smokers like myself.

Ultimately, these are stories that deserve to be known, told in a way that shows genuine care and enthusiasm for the source material. Take it from a female aviation enthusiast who grew up being told that women don’t have what it takes to become pilots! However, even if you don’t fall in love with the sound of an engine, you will find something here to delight you.