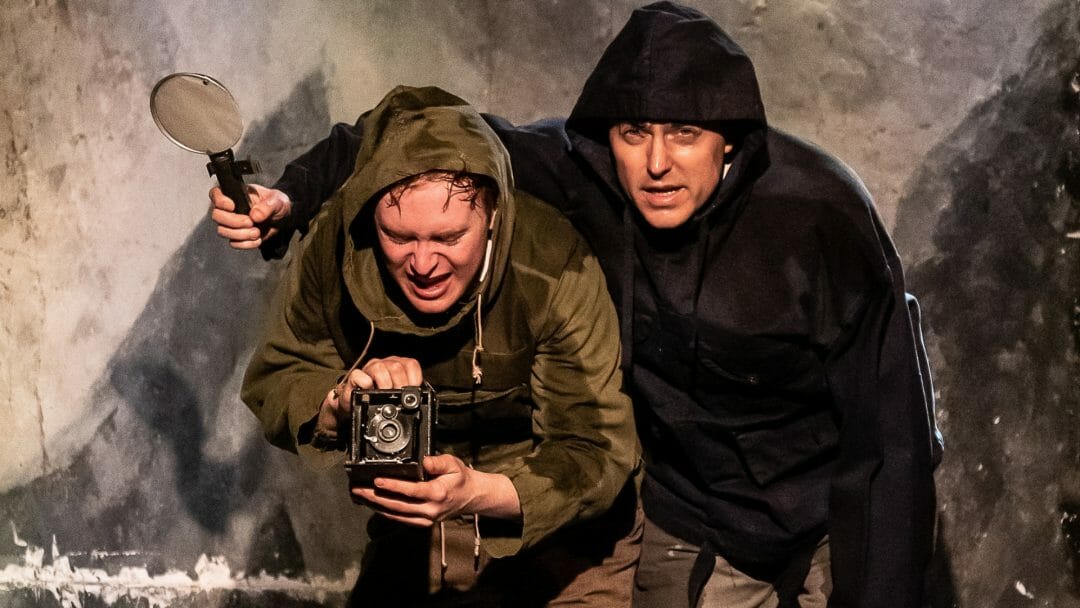 In this intimate production of David Greig’s 2002 play, we are transported to a world of harsh weather, barren horizons, naive hope, and seething ideological tensions. John and Robert are two young ornithologists, selected by the Ministry for an opportunity they would only have dreamt about: to spend one month in a remote island in the Outer Hebrides, observing the nesting habits of rare birds which remain obscure in scientific journals. Alone in this harsh environment with only an old Scottish shepherd of difficult temperament and his sheltered niece, the young men discover that all is not as it seems with the island, their mission, the birds, their neighbours, or even each other.

At two hours and fifteen minutes (including interval), I’m pretty sure Outlying Islands is the longest piece I’ve seen in a London pub theatre. The story simmers along on low heat, with events taking a while to come to the boil – but when they do, and tensions bubble over, the plot’s twists and turns take the audience by surprise (or me, anyway). Most of the action takes place in a central stage space which serves as the abandoned “pagan chapel” where John and Robert are camping out for their stay, and this cramped stage and audience space excellently conducts the feelings of claustrophia and cabin fever which the boys begin to develop. We only witness the outside world in a corner of the theatre, which in my memory is full of flitting bird shapes and driving wind, even though these were evoked only through Christopher Preece’s wonderful sound design.

The four main characters in this play are all very distinctive personalities, with two actors in particular standing out for their chemistry and comedic abilities: Rose Wardlaw as Ellen and Jack McMillan as John. In a story with an excess of navel-gazing, faux-edgy philosophising, and lulls, their interactions were some of the times when I found myself most captivated. Others included the snippets bordering on magical realism, such as an almost bacchanalian “pagan hymn” performed at a funeral, and the dreamy rapture of Ellen recounting an act of life-changing voyeurism. It was at these points that Jessica Lazar’s directorial touch shone through most clearly, as well as the neat work of movement director Jennifer Fletcher.

It is clear that a number of talented creatives have worked on this production, as we have come to expect from the team at Atticist. However, Outlying Islands is ultimately let down by its script, which gets bogged down in dialogue often reminiscent of a first-year philosophy student’s self-important extemporising on matters of self and society. That said, this didn’t irk my companion as much as it did me, (“possibly because I’m a pretentious white male myself” – his words!), and if that doesn’t sound like a deal-breaker for you, then I would absolutely recommend taking yourself to Islington to catch this eloquently staged production before it flies away.

BRAWN is a one man show, and this one man is certainly more than enough. Chris Wollaton, who is not only the actor but also the writer, dominates the stage with his words and his chiselled physique.

The Space is a great space for this minimalist piece of theatre; one black chair sandwiched by two large dumbbells. The fantastic acoustics guides Wollaton’s voice around the room, even at a whisper, which helps to transport us to Ryan’s garage-turned-gym where the play unfolds. Directed by Richard Weston, BRAWN shines a spotlight on the little known subject of muscle dysmorphia.

Ryan first enters the space in an obvious rush and starts working out almost immediately, raising his heart beat before removing his top. Bare chested he begins boasting in the ‘mirror’; “I’m a sexy beast.” These comic moments provide a light relief from the constant flow of gym culture.

Body obsessed Ryan gradually reveals aspects of his life which drove him to this physical and mental torment, which he obviously perceives it as a positive and focused mentality. The damage done by societies outlook on what masculinity is, and continuously advertising ‘perfection’ as a well defined muscular body, is evident and perhaps slightly repetitive. Ryan talks of how girls want to see a t-shirt tight against his ripped body, however he also delves into his past friendship with a girl from school which displays a softer side to him. These moments of gold where he forgets his weight lifting regime and shares heartfelt accounts with the audience shows the vulnerability underneath the lean figure. Chris Wollaton refers to this in the Q&A as a attempt to ‘influence men to notice what creates a real connection’.

It is clear that the bigger Ryan’s muscles get the more suppressed his insecurities become. This is a sad fact of many young men with body dysmorphia growing up with a warped view of masculinity. BRAWN is a must-see play, full of energy and covering a rarely addressed topic but one of upmost importance nonetheless.