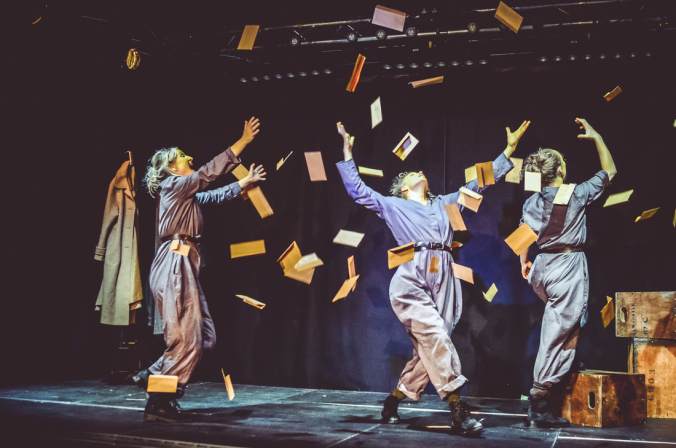 I watched Canary at the UK’s largest circus centre; Ciromedia, in the heart of Bristol, and what a magnificent stage for an energetic company like ‘Fun in the Oven’ to perform on. There was an abundance of space but every inch was kept alive throughout by the capable performers, the genius comedy, and the representation of such a strong topic.

This topic being WW1’s Canary Girls (don’t worry, no one watching knew of them either!), thousands of courageous British women doing more than just ‘their bit for the war effort’. Due to the lack of men, these ‘unsung war heroes’ were assembling TNT bombs everyday in factories; extremely dangerous work which gave them a number of health issues… one of which turned their skin yellow! (hence the makeup choice in Canary).

Whilst addressing this unique gem of history the talented cast showed us the life of three workers; confident supervisor Agnes, naive football lover Betty, and a slightly older upper class volunteer called Anne. After a quick clip of footage displaying some overly happy WW1 propaganda, Fun in the Oven takes hold our emotions, making us laugh, cry and in awe of their slick physically and strong ensemble. This was particularly prominent when they demonstrated how the women assemble the bombs, taking us through a conveyor belt of movements with a brilliant cheery voice over (by Lawrence Neale) encouraging them along.

After an air raid hits the factory we watch as their friendship blossoms even further and their hopes and fears unravel. We laughed through familiar games of truth or dare, secrets being shared, and were shocked by harsh realities. Although the most hard hitting moments were always cleverly uplifted with comedy, and superbly executed.

Preparing to leave each other and return to their homes after the war ended. Photo Credit: Chris Bishop

One of the highlights of this performance (pardon the pun) was when the girls ate cordite. This is a dangerous explosive used for ammunition, but also gave the girls a buzz which made them work faster and let off some steam. This sequence of crazy facial expressions and comedy madness allowed for their characteristics to explode (I’ll stop with the puns) and was extremely well received by the audience. It also lead us through an emotional discovery of how the women perceived themselves within society and hierarchy during the early 1900’s.

Canary is a strong piece of physical theatre addressing and remembering these female heroes of Britain (and rightly so). You will not be able to take your eyes off these three talented performers, and you will certainly leave with your eyes open to a wonderful snippet of history and your cheeks aching from all the laughter. It would be utterly mad not to grab a ticket to this show!