vessel is an experimental piece inspired by the writing of Judith Butler and the ancient practice of anchorage, where a member of clergy would voluntarily enter a cell for the remainder of their life. The anchoress – often a nun – would contemplate God and spirituality. The production tells us she has only three small windows which are all the communication she with the world until she dies and is buried in the grave she has dug for herself in the cell.

Reflecting this, our four performers are isolated and static for much of the show – anchored in circles, seated, though they move their chairs in synchronised movement at moments, signifying a change in theme.

If you’re with me so far, you know that this is a heavy show.

There’s no plot or character – simply four overlapping, almost identical monologues, presented in concert, the actor’s voices moving in and out of phase as they ask the audience to think about language, power, capitalism, sexuality, domesticity, violence – the personal and political.

The echoing voices, repeating and talking over each other, combined with low light projections of the text they read slipping across the backdrop, as well as a gentle, vivid ambient soundtrack designed by Owen Crouch, have a hypnotic quality – abstract art inviting abstracted thinking.

The text is dense – imagine two hundred thesis statements and a tone poem by Steve Reich – and only raises questions, answering them solely with increasing abstraction. It’s an unsatisfying piece, but this seems intentional – all good philosophy and poetry is semiotically open.

The actors, costumed by Holly Murray in outfits that suggest without directly referencing ecclesiastical clothes of different religions, express themselves almost entirely through voice and limited, ritualised gestures. We get the sense of these images, actions and questions recurring over and over throughout history. 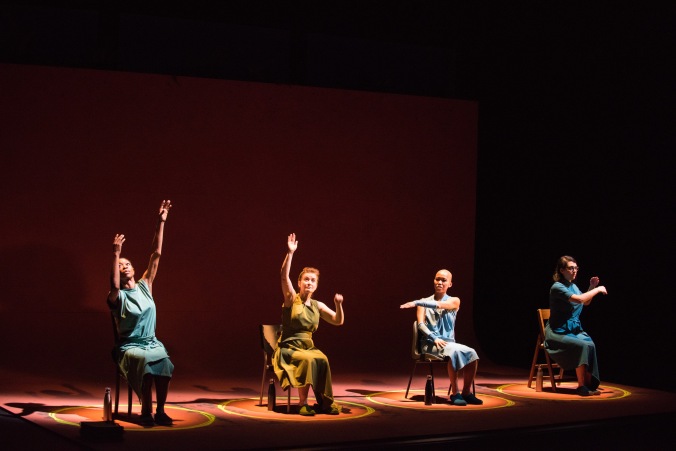 It’s a difficult show to talk about – I wouldn’t call it an enjoyable night out, but I may call it an important one.