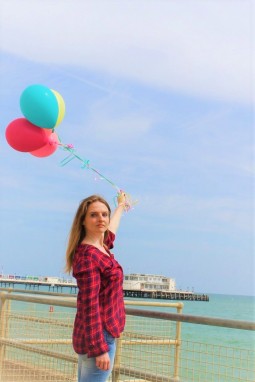 Small Truth Theatre premieres Alison Carr’s Caterpillar at Theatre503, a finalist of their 2016 Playwriting Award, with a continued run at the Stephen Joseph Theatre, Scarborough.

Caterpillar takes place at a closed seaside B&B run by grandmother Maevis who is recovering from a recent stroke that’s paralysed the left side of her body. Her daughter Claire has been living in to help look after her and seems unwilling to leave to return to her own life as a mother. Unexpectedly, guest Simon arrives late one night, to participate in a Red Bull style hang-gliding event taking over the town, the last request of his now dead girlfriend.

Alison Carr has an ear for natural dialogue and a knack for embedding comedy in her characters’ voices, offering up engaging, complex portraits of humanity. Yasmeen Arden’s quietly confident direction lets the charm and warmth of the text shine.

The production is a slow-burn, taking its time to introduce us to the world and unfurl the secrets at the heart of its characters. However, some of the darker reveals and decisions later in the piece feel unseeded in earlier action, especially stacked as they were in the second act.

The actors gave striking, well-drawn performances; credible and nuanced. Tricia Kelly as Maeve is a commanding combination of saucy humour and iron pragmatism, a vitality offset by the vulnerability of the character’s age and health issues. Alan Mahon disarms with a warm (later creepy) earnestness and Judith Amsenga assuredly balances tenderness, aggression and a biting wit.

Alison Carr’s writing finds fresh vision in familiar themes. I found the mother-daughter dynamic to be the strength of the piece: a mixture of loyalty, kind-cruelty, blindness and unmet expectations, and wish there had been greater attention given to this relationship as the linchpin of the play’s concerns, which sometimes felt unfocused. Caterpillar has interesting things to say about performative caring and reflects on constrictive roles both in and out of family structures.