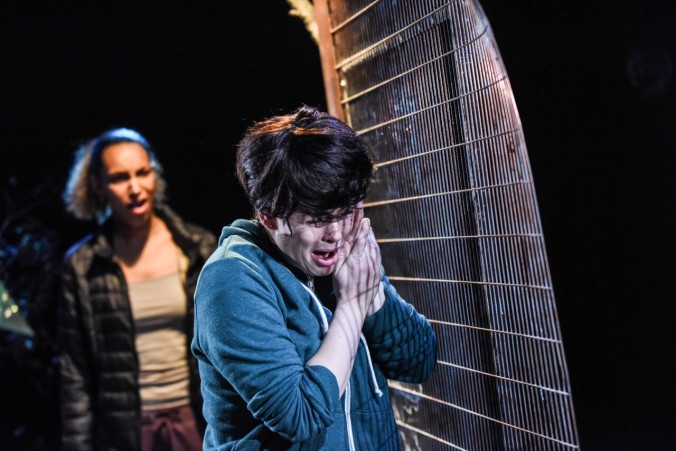 Three girls spend a night by the railway tracks. Joanne and Lisa are reunited, haunted by the ghosts of their past and the monsters in their present, in an extraordinary play about sexual exploitation and children who fall through the cracks.

It’s a play that has been brewing, developing and touring since 2015, and it shows. The set and performances are immersive in their quality, the performances are slick, and the production is near flawless.

I was left the theatre with my heart pounding in my chest, unable to form coherent sentences for half an hour.

Jane Upton’s script is simply superb. She treads the line between the heavy themes and engaging dialogue, character and humour with masterful sensitivity. It’s a deeply compelling, often hilarious drama, and is not only a terrific piece of theatre, but an essential one.

The characters are empathetic, recognisable, and poignant, and the sense of threat is pervasive and chilling. The cast is wonderfully engaging, convincingly playing much younger characters in a way which is alternately hysterical and heart-breaking. Sarah Hoare gives a grounded and wrenching performance as Lisa, while Tessie Orange-Turner drives the play as Joanne, a manipulative and often terrifying 16 year old which she performs with power and nuance. Esther-Grace Button (Amy) is a particular pleasure to watch, balancing the ensemble, and combining vulnerability and innocence with magnificent comic timing.

I hope to see more work from all three of them.

Watching this play is like standing on train tracks. It’s electric, exhilarating, and by the end you feel like you’ve been hit.

This production deals with issues of child exploitation. To learn more and support a worthy cause, please visit the ‘Safe and Sound’ website here.